Since we now know what to expect with IVIG infusions, I have decided to switch from doing real time infusion updates to doing updates after I recover from my infusions. I continue to get 30 grams of IVIG (which works out to about 1.2 g/kg) every 2 weeks at a rate of 50 mL/hour along with 2 liters of saline.

Let’s work backwards, shall we? I had IVIG #12 five days ago, on a Thursday, which also fell during our week with my stepdaughter (E) here. I was pleasantly surprised by how smoothly having an infusion with a kid running around went. She and I had talked about what happens during an infusion beforehand, so I knew she was freaked out by the possibility of seeing the needle get inserted, any blood, or where the IV goes into my arm. These issues were easily handled by having her leave the room while the IV was being placed and wrapping the IV site in some purple gauze. The IV pump was charged, so I didn’t have to drag the IV pole with me around the house which was nice.

E instantly took a liking to my nurse. In addition to being good company to me, she was an excellent little hostess. She suggested we have lunch together at the table, and when I was about to head back to the couch, she reminded me we should offer the nurse the dessert options we had available. 😀 We played a little, watched a season of Chopped Junior (house rule: the one with an IV in her arm gets the TV!), and had as good of a time as one can have while getting an infusion. In the future, I won’t hesitate to have an infusion with her around.

The IVIG headache began the night of the infusion which was unusual because my headache doesn’t typically begin until two days after the infusion. I blame the quick headache onset on the fact I spent a few hours during my infusion managing issues that popped up related to the house we are buying.

Getting everything dealt with that day felt like an episode of the TV show 24, except instead of a bomb detonating and a world war breaking out when I ran out of time, I would become a useless human being for 5 days and we would possibly lose the house.

Fortunately, I beat the clock and got everything figured out before Post IVIG Jackie was on the job. Throughout that day, I warned our realtor and loan officer, “I am taking 50 mg of Benadryl every 5 hours today. If at any point during the day I stop making sense, that will be why so let me know.”

You may wonder – how do I know I have an IVIG headache rather than a migraine? Well, everyone is different, but for me, the IVIG headaches hurt much more when I am lying flat, likely due to increased intracranial pressure. If you are familiar with POTS, you know lying flat relieves certain symptoms, such as presyncope. So which position I am in during the days following my infusions is a battle of POTS vs IVIG headache.

Fortunately, the headache was not severe enough to stop me from sleeping 16 hours after my infusion. The headache was a little better the day after the infusion (Friday), then got much worse on Saturday. From that point, it only got better. The pain level decreased, I began being able to think more clearly, and I questioned my ability to continue enduring this for 4-6 days every other week less and less.

Although I noted the date, IVIG batch number, and medications taken, I didn’t keep a journal after IVIG #11 because we were  busy with new house/stepdaughter week stuff. However, looking back through my text messages I see the days after my infusion followed same pattern as usual. Infusion – mild pain – lots of pain – less pain – back to normal. All I really have to offer you is this picture from my Facebook blog page. 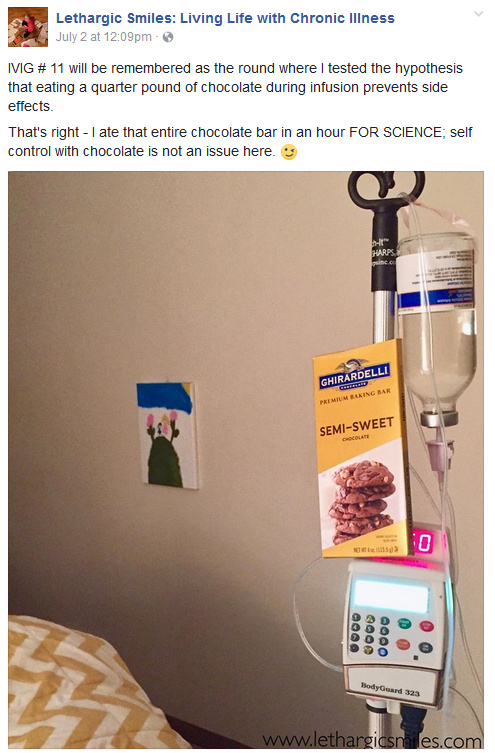 I am sad to report chocolate does not seem to be the answer to IVIG side effects.

Due to my allergy to Bactrim, I am going to visit my allergist next week to test if I am also allergic to Diamox. If I am not allergic, I will be taking it during IVIG #13 in hopes it reduces my intracranial pressure after infusions and helps me avoid getting a headache. On the week I don’t get IVIG and am recovered from the last infusion, I am able to do a little more than I used to be able to do. However, since I am also constantly making up for the 5 days I was in bed, this does not necessarily equate to getting more done overall compared to before. Not having such awful headaches with each infusion would definitely be a game changer for me!

Any good vibes you could send my way wouldn’t hurt. In the next 6 weeks I have 4 doctor appointments, 3 IVIG infusions, 3 physical therapy appointments, and we are closing on a house that needs all new floors and paint!