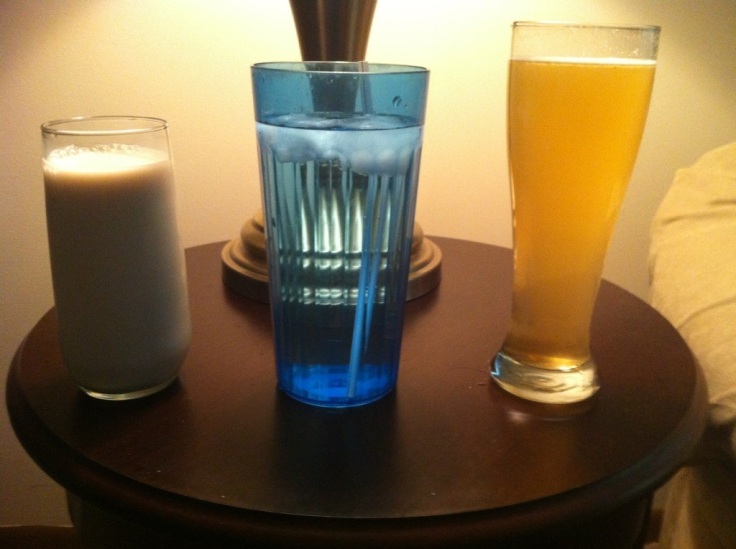 What are you looking at? You are looking at my daily breakfast (or pre-breakfast I suppose although I cannot eat for an hour or two after drinking all of this). I drink all of this first thing in the morning on my good days. On the bad days, I add 12 ounces of tomato juice for the extra fluid and sodium. You’re looking at…

The yellow beer looking beverage is Not Chick’n Broth which I use 1.5 bouillon cubes (3 servings worth) to make for a total of 2400 mg sodium. I use about 16 ounces of water to make this.

I drink about 12 ounces of plain unsweetened almond milk which has 270 mg of sodium since I buy it pre-packaged.

Then of course, I finish it off with a gigantic cup of water, about 30 ounces.

You’ll be surprised to hear I don’t have to run to the bathroom after my breakfast of champions. That is because there is so much sodium in these beverages, my body is hanging onto every ounce of the fluid! I’m getting 2670 mg of sodium first thing in the morning which is well above what any of you non-POTSie folk should be getting in a day. After this jump-start to my morning, I heavily salt my food throughout the day. I’d say on average, I get a minimum of 4 grams in. The reason I need all of this sodium is because I have low blood volume, venous pooling, and low blood pressure which all contribute to making POTS worse to live with. If I consume a ton of sodium, my body can hold on to more water than when I do not. This helps in various ways with all of the aforementioned conditions.

So I get 58 ounces of fluid first thing in the morning, and then I drink at least another liter or two of plain old water throughout the day. I go by how I feel but never drink less than 125 ounces of fluid a day. Although I don’t run to the bathroom a bunch after my 58 ounces of fluid in the morning, I do have to run to the bathroom quite a bit as I get in the rest (no, the pee doesn’t turn clear, so I know I’m not overdoing it). Later in the day, if I start feeling “off” due to blood pressure or (what I believe to be) low blood volume, I’ll drink one serving of Not Chick’n or Campbell’s tomato juice (980 mg of sodium in one cup).

Let me tell you a thing or two about my experience with sodium… When I first got sick and didn’t know what was wrong with me, my first instinct was to clean up my diet. I cut out processed foods and canned foods. I avoided sodium not only through avoiding canned foods, but also through avoiding adding salt to my food. I also would buy low-sodium versions of any processed product I just couldn’t live without. I was going to have the perfect diet and my body was going to heal itself Ironically, eliminating most of my sodium was the worst thing I could have done having POTS. It would be about 3 years later a doctor would tell me to consume more sodium and more water. About 6 months later, at Mayo Clinic, I found out I was consuming WAY too much water and still not enough sodium. My sodium levels were dangerously low because I was flushing out all of the sodium I was consuming. I needed to slightly decrease my fluid intake and drastically increase my sodium intake.

Every patient will require a different amount of sodium. Most people would develop high blood pressure if they consumed as much sodium as I do. Most people don’t need to worry about if they’re getting enough sodium because they eat so many processed, pre-packaged foods. Chances are, if anything, most people need to decrease their sodium intake. My diet is almost all whole foods, so I don’t get the amount of sodium I need naturally from my diet. I need to make a conscious effort to consume it. If you are considering adjusting your sodium levels I think it is important to ask your doctor to do a 24 urine test to check your current sodium levels. Also keep track of your blood pressure. Some people end up using Florinef to increase their blood volume rather than sodium. Always watch for urine color, it should be light yellow, not clear, not dark.

28 thoughts on “Breakfast of Champions”